Please watch out for pink salmon

Posted by Guest on Monday, 22 July 2019 in Highland Perthshire
Anglers and others on Scottish rivers are being asked to watch out for and report Pacific pink salmon which are now turning up in our rivers the summers of odd numbered years – a lot were reported in Scottish rivers 2017, including a dead one picked up just below Pitlochry Dam http://pitlochryanglingclub.blogspot.com/2017/07/a-pink-salmon-on-portnacraig-pitlochry.htmland http://pitlochryanglingclub.blogspot.com/2017/07/whoops-somehow-lost-photo-of-tail-in.html which is a likely spot for any straying fish to get held up. To date (22 July), there have only been a few reported in Scotland in 2019 – we have noticed reports of ones being caught in the Aberdeenshire Dee, the River Deveron, the River Awe and the Kyle of Sutherland and there will be others*. There have also been reports from Ireland and North East England. But, based on 2017, the main period they would be expected to turn up is over the next few weeks. Please look at the Marine Scotland topic sheet (images pasted in below) for more information on what to watch out for and do - please click on the images to see them larger.

*Update 22/7/19 5:18 BST: We have heard from Brian Davidson of Fisheries Management Scotland and Sean Dugan of the Scottish Fisheries Co-ordination Centre that there are now reports from Aberdeenshire Dee (2 fish), the River Deveron (1), the River Awe (1), the Kyle of Sutherland rivers (3), the Tweed (1) and the sea off the River Polla on the north coast (1), ie nine in total, so they are about and do watch out for them. 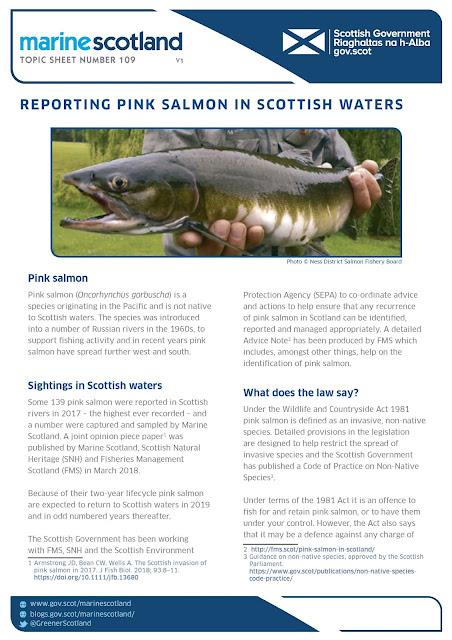 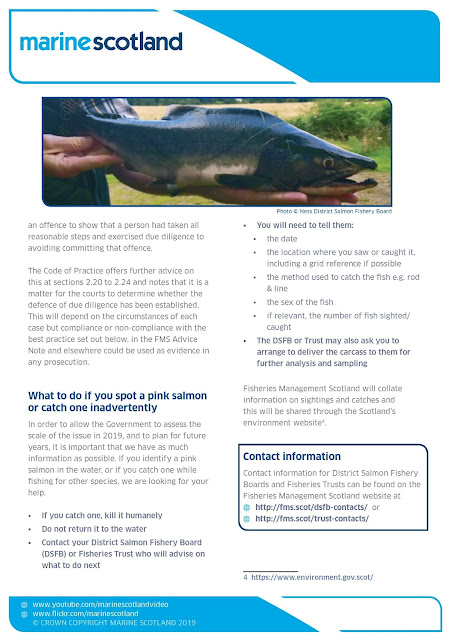