Posted by Guest on Friday, 28 July 2017 in Highland Perthshire 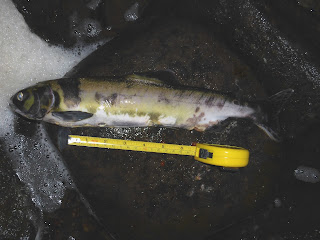 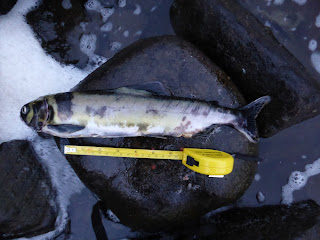 This evening a Club member fishing the Pitlochry bank reported that there was a dead sea trout in the water close to the top of the beat on that bank. Committee member Ross Gardiner looked in the late evening and did indeed find a dead fish in the water, but it was a small female pink salmon (also known as humpback salmon) of 40 centimetres (just under 16”) in length. As many of you will know, such fish are strays to Scotland, and may be from rivers in north-west Russia. There have been about 40 reported in Scottish rivers since early July and although establishment of populations in Scotland is currently not thought to be likely, to prevent any which are captured from spawning, anglers are being asked to retain, report and, if possible, pass any on to the local Salmon Board or Fisheries Trust for inspection – for further advice please look at http://fms.scot/wp-content/uploads/2017/07/Pinksalmon.pdf.  Likewise with dead ones which are found, which is quite likely as they are summer spawners. Do please watch out for these fish and do look closely at any dead fish you come across.

Apologies for the poor photos which were taken in half dark conditions, but please note the small scales, the unusual spotting on the tail fin and the loose eggs on the stone - this was a ripe female. Please click on the photos to see larger versions.