News from the ladder

Posted by peter on Friday, 25 July 2014 in Highland Perthshire
Just a wee update on what's happening with the salmon counts this year at Pitlochry Dam fish ladder using information from our popular Pitlochry counter Twitter site -  see link on this page.
Salmon started getting up the ladder in early April at a water temperature of about 6C. During April although some salmon got up the ladder, numbers mainly built up downstream of the dam. In early May, the water became warm enough to allow the waiting salmon to clear quickly producing the clear pulse in the counts seen in the plot below. There was then a short lull before the count built up quickly through May as the main run of salmon arrived, and into June and July. We are currently waiting for the main run of grilse to arrive. 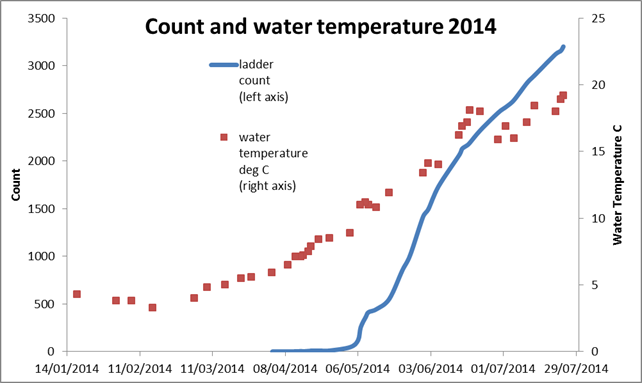 It is not just salmon that can be seen in the fish pass. The photo shows a large number of small eels and some other small fish at the downstream end of the fish pass yesterday.

Please click on the image for a larger version.