Menu
As we reach the end of the 2013 Year of Natural Scotland, our "Birnam Glen" blogger gives us a round up of the year from the perspective of the Glen (and occasional forays further afield!). 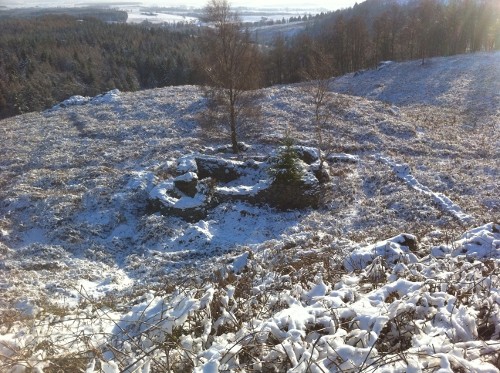 2013 began, surprise surprise, with snow - and a magical walk up Birnam Hill in the company of BBC Radio Scotland's Mark Stephen for his "Out of Doors" programme.
One of my favourite places in the world is the tiny little ruin of Rohallion Castle, half way up Birnam Hill.  As you approach it (best done in the winter, by the way, as in the summer the bracken is head high!), you think to yourself that you're coming across the ruin of an old croft house or similar.  But you'd be wring, these really are the ruins of a C16th Z plan castle - even if it may well be the smallest castle in Scotland!
More information.
As the snows disappeared, in February thoughts turned to spring, while on a regular early morning walk up the Glen, our resident heron reappeared after many months absence - see here for a video (not taken in February you understand!): http://www.highlandperthshire.org/blogs/entry/birnam-glen-s-resident-heron
And a few days later, inspired by our unexpected encounter with the long absent heron, we trawled the iphone for videos of the somewhat eccentric selection of birds we'd come across while out and about:
This included everything from lost homing pigeons, tame pheasants, migrating geese to barely visible/audible buzzards and very friendly wee birds...
...but it didn't end there, as spring advanced and the woodpeckers pitched up:
And now we really were thinking about spring!  But we had no idea what an amazing summer awaited... more to follow!