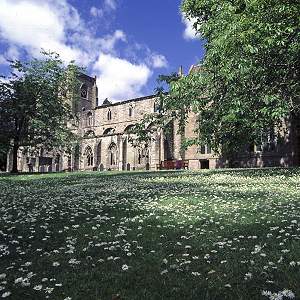 Thousands of years of Scottish history can be uncovered in Highland Perthshire.
Our Iron Age forefathers built crannogs, dwellings on stilts, in the waters of Loch
Tay - the Scottish Crannog Centre is an accurate and fascinating reconstruction of how they lived.
The Romans reached as far north as Fortingall, once the capital of a Pictish chieftain. You'll find ancient Pictish carved stones all around Highland Perthshire, including the Dunfallandy Stone, by Pitlochry.

In the 9th century, Kenneth McAlpin merged the Picts and the Scots into one nation and
established Dunkeld as Scotland's first religious capital. Dunkeld Cathedral itself was built in the 13th century. The notorious Wolf of Badenoch, the son of King Robert II, is buried there in a rare surviving medieval Scottish tomb.

Being strategically located, Highland Perthshire has seen many castles. Prime among
them is Blair Castle, the seat of the Dukes of Atholl, which dates back to 1269 although
much of the present day castle was constructed in the 18th century. It is a treasure trove of historic artefacts and also home to the Atholl Highlanders, Europe's last remaining private army.

The 17th century battles of Killiecrankie and Dunkeld are testament to the troubled times of the Jacobite Rebellions. Bonnie Prince Charlie stayed at Castle Menzies as he retreated north from his ill fated attempt to claim the British throne in 1745.

In nearby Aberfeldy, the Black Watch Monument commemorates the famous regiment that was originally raised here to "watch" the rebellious Highland clans (families).

Those who wish to learn more about Scottish clans can follow the Clan Trail around Loch Rannoch, which combines history with beautiful scenery.

The 19th century saw quieter times as landowners undertook improvements, planting forests and developing estates. Queen Victoria visited the area in 1842 staying at Taymouth Castle in Kenmore, where a spectacular ball was held in her honour.

The coming of the railways brought many new holiday visitors to Highland Perthshire and inspired the creation of resort towns like Pitlochry and Birnam.
In the 20th century, Highland Perthshire led the way in green energy as Scotland's first large scale hydro electricity scheme was built at Loch Tummel. A new loch, Loch Faskally, was created and is now a playground for visitors to Pitlochry, where the famous Salmon Ladder at the Scottish Hydro Visitor Centre allows fish to reach their spawning grounds above Pitlochry Dam.

From Iron Age farmers to modern day engineers, the full and fascinating story of Scotland is all here in Highland Perthshire.

Things to See & Do